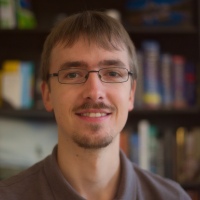 Since February 2019, I am a senior postdoctoral researcher in the group of Radim Filip at the Department of Optics, Palacký University Olomouc, Czechia.

Between 2017 and 2019, I worked as a postdoctoral researcher in the group of Claudiu Genes at the Max Planck Institute for the Science of Light in Erlangen, Germany. I worked on hybrid optomechanics with mechanical oscillators functionalized with ensembles of two-level systems.

From 2013 to 2017, I did my Ph.D. studies in theoretical physics in the group of Klemens Hammerer at the Institute for Theoretical Physics, Leibniz University Hannover, Germany. I worked on quantum optomechanics (a subfield of quantum physics dealing with interactions of light with mechanical oscillators), in particular its use for conversion between microwave and optical fields.

Between the years 2011 and 2013, I did my masters in Optics and Optoelectronics at the Palacký University Olomouc. I did my master thesis titled Transformations of continuous-variable entangled states of light under the supervision of Jaromír Fiurášek. I spent the academic year 2011-2012 as an exchange student at Umeå University in Sweden.

I did my bachelor studies between 2008 and 2011 also in Optics and Optoelectronics at the Palacký University Olomouc. My bachelor thesis (also supervised by Jaromír Fiurášek), Numerical simulation of dynamics of quantum systems using stochastic wavefunction method, dealt with simulations of open quantum systems (i.e., systems interacting with the surrounding environment) using Monte Carlo approach.